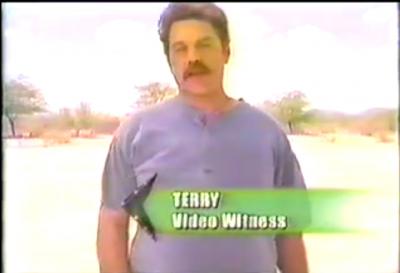 This video was recorded by Terry Proctor in Carefree, Arizona around 8:25 PM. Not only did Terry record the only footage that exists from that night of this event from 8:30, he stayed outside and also recorded the 10:00 PM event too!

Terry had been seeing the orange flares from the gunnery range for several months. There were atleast 3 people seeing these lights for days in some cases months before the famous 10:00 PM event. Terry stated right after this happened that the 10:00 PM event were flares. Aside for one interview on the Discovery Channel he wanted nothing to do with this case at all. He handed over his video to Richard Motzer a MUFON investigator who for some reason said the video was recorded Terry McLaren.

As you watch the video you can see one light drift out of formation from the other lights. Its hard to tell how high up the object is or how large it just from looking at the video. From my research the object was atleast 700 foot long and some people said it was around 1 mile long. Over the years I've read many people attempt to dismiss this case as just a bunch of A-10s in formation that flew over Phoenix at 8:30 PM and then dropped some flares at 10:00 PM!

This is absolute nonsense offered by debunkers who never investigated the case to begin with. I've read many investigations of 'our investigation' by other debunkers. These debunkers did not bother to call any witnesses or go to the 5 town hall meetings Village Labs held for eyewitnesses. They never emailed or called me or the other people who recorded video that night and asked for a copy of the tapes. They did nothing! They do love to go on TV shows and claim they investigated it and offer up nonsense explanations then sell their books. If these debunkers never investigated the biggest UFO case of all time they they certinly don't investigate smaller cases neither.

To do more research on the Phoenix Lights I have dozens of hours of footage you can watch here.

I also built a timeline that I update from time to time which you can view here.