Picking up where I left off yesterday on the Black Donut UAP. Two weeks after Mr. Duran captured the Black Donut over Aurora, Colordo. Then an identical looking object of the same shape and dimensions was captured over Brooklyn, New York on 3-14-2020.

This video shows the Black Donut again but its clearly not balloon just drifting in the wind. This thing is moving at a good pace. The object from Brooklyn also rocks from side to side as seen in the Aurora video. They look like its pretty much the same object that some how either traveled from Colorado to New York. It could also be an new drone that is for sale that people are playing around with. Drone's simply can't be ruled out with the 3 videos but neither can UAPs be ruled out.

The take away here is you can't tell what the Black Donut is should you come across one of them. It could be just another holiday balloon that's floating around but it might just take off and fly away like this Brooklyn video does. All you can do is run and get a camera and record it and figure it out after the fact. The Black Donut isn't really a thing in the UAP world yet. It's not a common UAP you might come across like the Cigars and Triangles are as established UAPs with a recorded of evidence going back several decades. 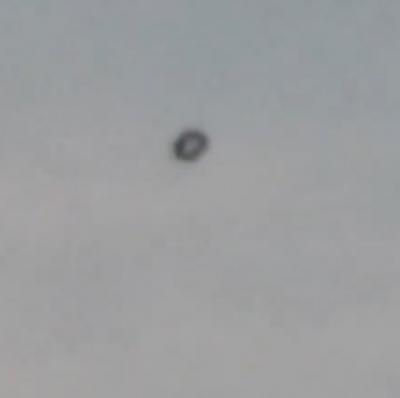 3 different captures of the same looking UAP from 2 different locations around the world. This object was recorded twice in 2020! #BOLO Black Donut UAP! Be on the lookout for the Black Donut UAP and you have seen it, or have captured it, or know of other videos contact me using the tools on the website.